Let’s get spooky! Our annual Halloween festival, Shadow of the Mad King, is now live. Check out the release highlights and update notes for all the details. 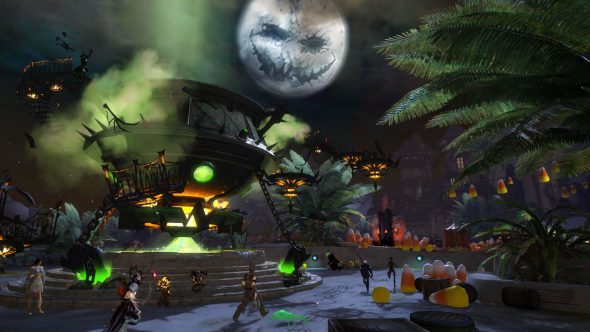 First, check your in-game mail for a letter from Magister Tassi containing an Invitation to the Mad Realm. Use this item to travel back and forth between Tyria and Mad King’s Labyrinth.

Lion’s Arch is Tyria’s Halloween celebration headquarters. Asura gate portals to Lion’s Arch are available in major cities and can be used by any player who has the Guild Wars 2: Path of Fire™ expansion or is at least level 35.

Players without access to Lion’s Arch can travel to the Mad Realm from the Village of Shaemoor in Queensdale, the Village of Smokestead in the Plains of Ashford, Snowlord’s Gate in the Wayfarer Foothills, the Village of Astorea in Caledon Forest, and Soren Draa in Metrica Province. These locations are outside each starting city’s main gate. Run to the candy corn icon on your map and speak to a Lunatic Boatmaster guarding a haunted door, and they’ll whisk you away to your choice of eerie activities.

Haunted doors will also appear in Kessex Hills and Gendarran Fields throughout the event. Interact with the doors to trick-or-treat! 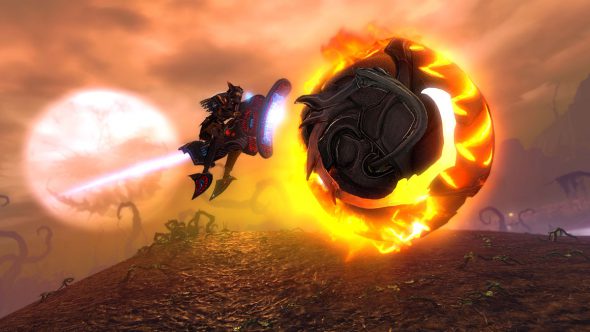 The city of Lion’s Arch is transformed with scary decorations and a gloomy autumn glow! Every two hours, Mad King Thorn will gather his “subjects” (anyone within shouting distance) to play a game. Perform the emotes he commands you to—but only if he calls out, “Your Mad King says.” If you do well, you’ll receive keys to unlock the Mad King’s Chest.

The Grand Piazza also features seasonal vendors and doors to Shadow of the Mad King activities.

Mad King’s Labyrinth
Battle hordes of Halloween creatures, race your mounts, and trick-or-treat at haunted doors through the twists and turns of a macabre maze. It’s a great way to gain experience for your characters and Trick-or-Treat Bags full of goodies, especially if you team up with other players to explore. Stay on your toes, though—powerful enemies like the Grand High Viscount of Candy Corn, legendary Skeletal Lich, and Labyrinthine Horror will make nougat of the unwary.

Mad King’s Clock Tower
Hop to the top of a vicious timed jumping puzzle before the deadly miasma below makes its way to you.

Ascent to Madness
Face Mad King Thorn himself! This dungeon encounter is intended for players of all skill levels and can be entered from Lion’s Arch.

Mad King’s Raceway
Take your mounts out for a spin in time trials and races against other players. Springer, jackal, and roller beetle rentals are available if you need a steed.

Minigames
Speak to a Lunatic Boatmaster to participate in Reaper’s Rumble or Lunatic Inquisition. 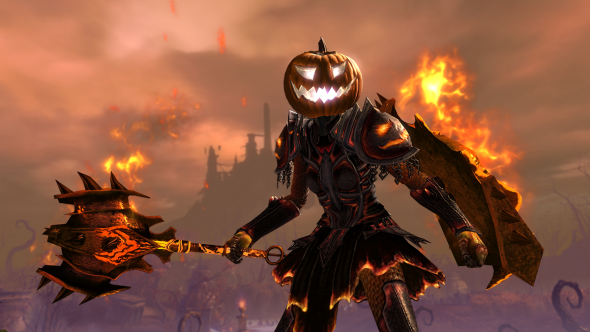 Shadow of the Mad King activities award Trick-or-Treat Bags containing a vast selection of Halloween goods. The primary currency is candy corn, which can be traded to special vendors for minis, armor skins, recipes, and more.

Many unique rewards are obtained by completing achievements. You’ll find information on the Shadow of the Mad King achievements and their rewards in your Hero panel under the Daily and Festivals categories.

Have fun and remember to trick-or-treat safely!