Our summer plans for Guild Wars 2 are packed with events! Check our official site on Mondays for a schedule of the week’s activities, and follow our Twitter, Instagram, and Facebook accounts for news and updates. Don’t forget—you’ll always find important information, Guild Wars 2 discussions, and community resources on our official forums.

If you’re new to Guild Wars 2 or returning to Tyria after a long journey, browse the #GW2Info hashtag on Twitter for helpful tips! Have you gathered knowledge and wisdom on your adventures? Use the hashtag to share your own tips with the community.

Return to the Living World Story: “One Path Ends” 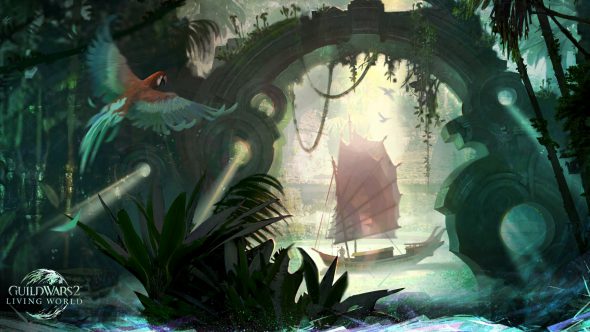 Catch up on the story of the dragon cycle and prepare for Guild Wars 2: End of Dragons. Log in to Guild Wars 2 between 3 August and 9 August to unlock this week’s spotlight episode for free! Check your in-game mailbox for a letter containing a story unlock token. You’ll find the unlocked episode under “Living World™ Season 3” in your story journal tab, which is located in the Hero panel. If you’ve already unlocked the episodes previously, you don’t need the tokens—you’re good to go!

New achievements for the episode are available in the “Bonus Events” category of your achievements tab. You can complete these at any time to progress the Seasons of the Dragons meta-achievement and work toward earning legendary rewards.

In addition to the new meta-achievement, there are plenty of existing achievements to earn, rewards to collect, and secrets to find in the episode itself. Here are some handy links to our official wiki to get you started.

Taimi’s machine returned Jormag and Primordus to a dormant state, but Balthazar vanished in the aftermath. His assault on the Elder Dragons could spell doom for Tyria, making it crucial to find him before he strikes again. Where do you begin the hunt for a rogue god?

Prepare for battle! Call of the Mists will be active during the first week of Season 28, granting a 15% bonus to PvP rank point gain, a 25% bonus to reward-track progress, and a 200% magic find bonus.